Left: Sgt. Tyler Ziegel with his wife, Renee, in 2006. Photo by Nina Berman

A couple years ago, I randomly wrote a post because I was so affected by a photo exhibit at the Whitney Museum. The photos documented the life of Marine Tyler Ziegel, who suffered horrific burns during a suicide bomb attack in Iraq; the photographer, Nina Berman, was awarded the World Press Photo’s portraiture award in 2006 and Ziegel became one of the iconic images of the hell of war.

After writing that post, I might not have thought much more about Ziegel, who by all accounts lived a quiet life. But through some strange fluke with Google, that post ended up being one of the first search results for Ziegel’s name. The steady stream of visitors to it was a constant reminder of his sacrifice. He inspired such admiration and compassion that that random post is by far the most viewed page on this blog.

Berman’s image is unforgettable. But Ziegel’s story after the blast is also compelling. People Magazine did a profile of Ziegel shortly after his wedding in 2006:

For Ty and Renee the two years since have been a wrenching test of love and character. In a culture obsessed with physical perfection, Ty is now vulnerable to stares and whispers. Not naturally introspective and blunt to the point of gruffness, he says he doesn’t bother with what-ifs. Rather, he relies on a store of dark humor. “I’m thinking of writing a book, You Know You’ve Been Blown Up If…,” he says, in homage to redneck comic Jeff Foxworthy. “Like, ‘You know you’ve been blown up if a year later you bleed in the shower.'” One night, out to dinner with a Marine pal, Ty had a little fun with a man who was smoking. “My friend was like, ‘Hey buddy, do you mind? Do you see what happened to this smoker?'” Ty recalls. “The guy put his cigarette out and walked away.”

There’s also this 2007 interview with Berman in Salon (before Ziegel and his wife divorced):

Yes. I asked Ty, what do little kids say? Do little kids get scared? In my book, Iâ€™d photographed a really severely burned soldier. And when I was with him Iâ€™d see kids shy away and he would smile at them. 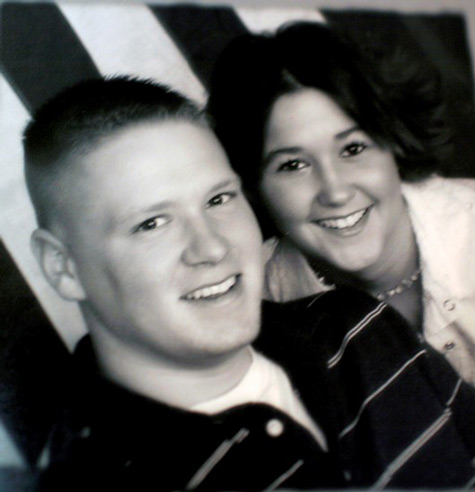